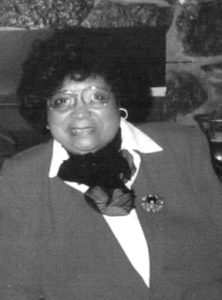 Mary Elizabeth Bumpas Frierson was born on November 19, 1929, in Lawrenceburg, Tennessee to the late Leroy Bumpas and Essie Lymon Bumpas. On July 17, 2018, God called his Angel home. She departed this life at NHC Lawrenceburg on Brink Street.

Mary was educated in the Lawrence County School System, and retired from Murray Ohio Manufacturing after 19 years of service. She was a faithful member of College Place Church of Christ.

Mary was a loving person and full of life. So many have said that they were blessed to have known her, and cherish the friendships that she developed with them. She befriended people everywhere she went. Mary dearly loved her family. Although God didn’t bless her with biological children… SHE was a blessing to many of her nieces and nephews who looked upon her as a “second mother.” They were blessed with her wisdom, guidance, and love, and will truly miss her.

Visitation will be held at the Pettus-Turnbo Funeral chapel on Friday, July 20th, 2018 from 5:00p.m. to 8:00p.m. The funeral service will be on Saturday, July 21st, 2018 at 11 a.m. with Patrick Johnson and Joseph Simpson officiating. Interment will be at Lawrence County Memorial Gardens. Donations may be made to College Place Church of Christ. Pettus-Turnbo Funeral Home was in charge of all arrangements.