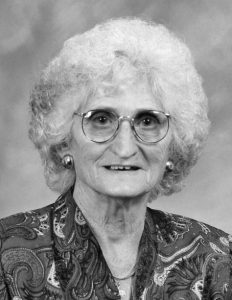 Bertie Juanita Daniel, age 97, of Lawrenceburg, TN passed away Tuesday, July 31, 2018 at NHC Healthcare of Scott in Lawrenceburg, TN. She was a native of Wayne County, TN, and a homemaker.

She was preceded in death by her parents, Robert and Mattie Nelson Berry; her husband, J. P. Daniel; and one daughter, Mary Prince.

Funeral services for Bertie Juanita Daniel were conducted at Neal Funeral Home at 12:30 p.m. Thursday, August 2, 2018, with Mickey Brackin officiating. Graveside services and interment followed at 3:00 p.m. at Memorial Gardens in Collinwood, TN. Condolences may be sent by way of our website at www.nealfuneralhome.net.