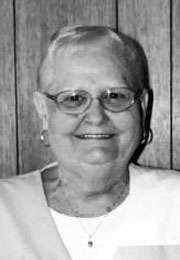 She was born May 30, 1936 in Waynesboro, TN, the daughter of the late Luther Clarence and Lula Merriman Martin. She married Jim Taylor McCurry, December 4, 1954 and he preceded her in death, October 19, 1978.

Mrs. McCurry, retired from Fisher Body in Livonia, Michigan, was a member of Waynesboro Church of Christ.

She was also preceded in death by brother, Clarence Weldon “Pepper” Martin and an infant brother and sister.