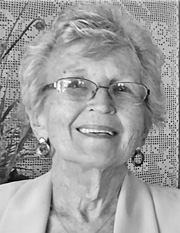 She was a native of Grassy, AL, former Lawrence County Court Clerk, retired from TDOT, and a member of Macedonia Baptist Church for over 61 years.  Mrs. Aaron was a devoted wife for over 71 years, a mother and a nana.  She was also a 50 plus year member of the Order of Eastern Star and a State Officer in 1993.  Her home chapter was the Ethridge Eastern Star where she was a charter member.