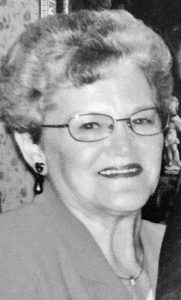 She was a native of Lauderdale Co, AL, a homemaker/ house cleaner and a member of St Joseph Church of Christ.