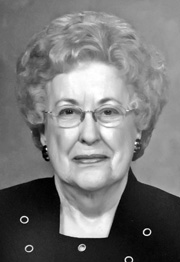 Mrs. Wall was born December 14, 1929, in Hardin County, Savannah, TN.  She was a homemaker and a member of Immanuel Baptist Church.

She was preceded in death by her parents, Otis K. and Lillian Lackey Bain; one brother, Raymond K. Bain; and her husband of 65 years, James E. Wall.

Funeral services for Ruth Ann Wall were conducted at Neal Funeral Home at 3:00 p.m. Sunday, September 9, 2018, with Chris Campbell, Reggie Coleman and Keith Durham officiating. Interment followed at Mimosa Cemetery in Lawrenceburg, TN. Condolences may be sent by way of our website at www.nealfuneralhome.net.