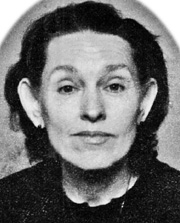 She was a native of Lawrence County, TN.

She was preceded in death by her parents, Elvis Richard and Josephine Hunt Whitehead; and one sister, Melba Jean Spears.