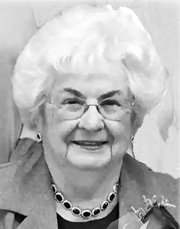 Craig Marie Nutt Lee was born November 21, 1931 in Waynesboro, TN the daughter of the late Grady and Inez Churchwell Nutt.

She was a homemaker and a member of the Wayne Furnace Church of Christ. She was united in marriage to Glann Lee on March 17, 1955. She served as a minister’s wife for 60+ years. He preceded her in death on October 18, 2016.

Funeral services for Craig Marie Nutt Lee were held on Tuesday, October 16, 2018 at 11:00 a.m. at Wayne Furnace Church of Christ in Waynesboro, TN with Cary Crews and David Coy officiating. Burial followed in Memorial Gardens, Waynesboro, TN. Shackelford Funeral Directors was in charge of all arrangements.