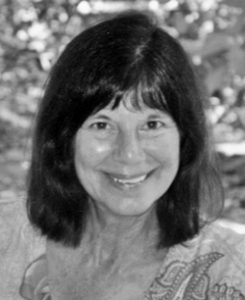 Her most recent permanent address had been in Roanoke, VA. She was born August 18, 1950 in St. Louis, MO and also grew up in Falls Church, VA.

She held degrees in Comparative Religion, Early Childhood Development and Educational Psychology from the University of Indiana and the University of Virginia. It was after completing her Master’s Degree in Clinical Psychology at MTSU that she came to work at the Lawrence County Mental Health Center for several years in the mid-nineties. Her vocation was primarily in the fields of education and health but toward the end of her life she traveled by taking long-term house-sitting jobs.

She had a rich life, living in a variety of states and foreign countries. She studied Hinduism in both France and India. Her other interests included photography, film, horse training and caring for shelter dogs.

She was preceded in death by her father, Charles Sher, and her mother and step-father, Ernie and Roslyn Rafey. Her beloved husband, Kenneth Appel, passed in 2009 and she had no children.

Beverly was grateful for the compassion shown to her at the end of her life by local friends, members of Word of Life Ministries in Leoma and the staff of Compassus Hospice. A private memorial service and celebration of her life will be arranged in November.