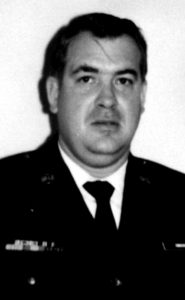 He was born September 10, 1942 in Loretto, Tennessee to the late Frank and Annie Walters Grooms. Hollis left Loretto to join the Air Force- In his 22 years of service, he lived in and visited many parts of the world – to include a tour in Vietnam. He retired as a Master Sergeant in 1982. Not content with only one retirement, he went to work for the US Postal Service as a mail carrier and retired with more than 20 years of service there as well. Hollis loved watching the Washington Redskins play football and the Dodgers play baseball. When not immersed in a football or baseball game, he would switch over and enjoy watching Nascar as well. In his downtime, he mostly liked to get out on the golf

greens or head to a body of water to put out a fishing pole or two. Like most fishermen, he loved the art of fishing as much as the actual catch. He was fortunate to have been able to fish in many different streams, rivers and oceans, and was very proud of the Marlin, he and a friend caught while living in Hawaii.

Hollis had a great love of country music and old fashioned Rock-N-Roll from the 50s. His reel-to-reel tape recorder was something he treasured and he had many tapes of artists such as Fats Domino, Little Richard, Merle Haggard, Don Williams and Johnny Cash.

In addition to his parents, Hollis was preceded in death by two brothers, Jim and Joe Grooms; two sisters, Lois Weaver and Alison Grooms.

There will be two Memorial Services. The first were held at 6:00 p.m., Thursday, October 25, 2018 at Mt. Carmel Baptist Church in Cabot with Pastor David Mitchell officiating. Arrangements in Cabot, Arkansas are being handled by Thomas Funeral Service (501) 941- 7888. www.thomasfuneralservice.com