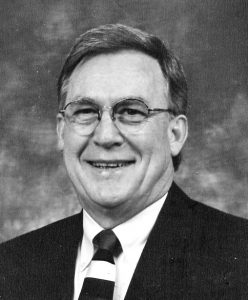 He was a native of Lawrence County, TN, retired banker after 34 years, and a member of Immanuel Baptist Church. Mr. Johnston served his country honorably in the U.S. Army.  He was in the 1970 Edition of the Outstanding Young Men of America, Treasurer with the Lawrence County Civitan Club from 1972 until 1973, and commissioned as a Kentucky Colonel by the Commonwealth of Kentucky in 1978  In 1981, Mr. Johnston was awarded Boss of the Year from Lawrence County B&P.W., received an Honorary Citizen Award from Metropolitan Nashville in 1986, and a Service Award from the Lawrence County Jaycees.  He served as President of the Tennessee Natchez Trace Corridor Association from 1990 until 1991.  He was also a member of the Lawrence County Chamber of Commerce and the Lewis County Chamber of Commerce where he served as President from 1990 until 1993.

He was preceded in death by his parents, Spencer Johnston and Leota Ayers Johnston Hartsfield; and one sister, Doris Nell Osborn.