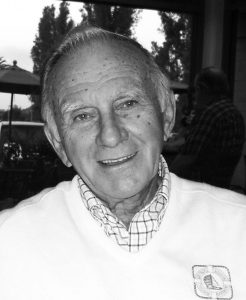 Coy Rayford Green, age 89, went home to be with his Savior October 26, 2018.  From his birth in Lawrenceburg, TN, on December 24, 1928 to his death he nourished family, friends and others with love, faith, and support.  A reserved quiet man he was always ready to help while showing God’s love in the process.

A native of Lawrenceburg he enjoyed all sports, served in the navy on the Duxbury Bay for 2 years, then moved to Detroit, MI where he married Millie Hammond and had 4 daughters.  He worked for Detroit Edison until retirement and then moved back to TN.

Coy served as a Board member for the Michigan Christian Youth Camp, he was a member of the Lion’s Club in MI and TN, a member of Pulaksi Street Church of Christ, and he considered his biggest accomplishments his three girls.  Coy and his wife of 60 years, Millie (who passed in 2012) started a church in their home in Caro, MI, 48 years later that church is still alive today. They were both active members in every church they attended, Coy serving as an Elder and Song Leader in Detroit, Deckerville and Caro, Michigan. Coy worked to share the gospel with as many people as he could.

Loved and cherished by many people, Coy touched many lives during his time on earth.  We draw comfort in the fact that he had a long and healthy life that deserved the final rest.  Left to honor Coy and remember his love are Dorothy Fowler; Coy’s three daughters, Denise Spencer (David who was preceded), Karen Dunn (Eldon Dunn), Jeanette Green, and Susan who passed at one month old; granddaughter, Amanda Spencer; sister, Maxine Anderson; sisters-in-law, Hilda Simpson and Viola Green, and many nieces and nephews.

Coy will be remembered as a unique gentleman always willing to offer his wisdom and support in the communities and churches he served.

Funeral services will be conducted at Neal Funeral Home at 1:00 p.m, Saturday, November 3, 2018, with Bob Markus officiating. Interment followed at Pleasant Grove Cemetery in Lawrence County, TN. Condolences may be sent by way of our website at www.nealfuneralhome.net.