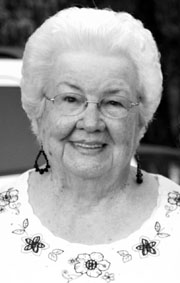 She was a native of Le Flore County, OK, a homemaker, and a member of First Baptist Church Lawrenceburg.

She was preceded in death by her parents, John Walter and Ella Mae Langwell Adams; her husband, Luther Dalson Hammond; four brothers; and two sisters.

Graveside services and interment for Goldie Irene Hammond were conducted at John Lay Cemetery at 3:00 p.m. Saturday, November 3, 2018, with Jamie Peterson officiating.  Condolences may be sent by way of our website at www.nealfuneralhome.net.