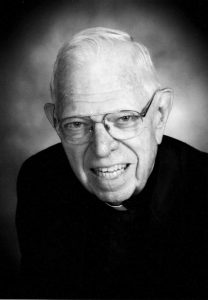 Father Bernard attended Sacred Heart School and spent three years at Lawrence County High School.  He graduated from Father Ryan High School in Nashville in 1943.  To prepare for the Priesthood, he attended St. Charles College and St. Mary’s Seminary in Baltimore.  On June 3, 1950 he was ordained to the Priesthood by Bishop William L. Adrian at the Cathedral of the Incarnation in Nashville.  His first Solemn Mass was sung at Sacred Heart Church in Lawrenceburg.  His first assignment was to be an assistant to Msgr. Leo H. Ringwald at Blessed Sacrament Church and St. Michael Church in Memphis, and St. Ann’s Mission in Bartlett, Tennessee.  From 1954-1956 he was assistant to Father Albert Henkel at Blessed Sacrament Church in Harriman in East Tennessee covering 10 counties and 7 mission churches!  His first pastorate from 1956 to 1966 was to Notre Dame Church in Greenville, TN and its missions covering nine counties.  From Greeneville he organized and built St. Patrick Church in Morristown, and St. Henry Church in Rogersville.  He loved the beauty of East Tennessee, and almost all of his vacations were spent in the mountains with his classmate, Father Leonard Oglesby and friends.  In 1966 he was appointed Diocesan Director of the Confraternity of Christian Doctrine, and made Pastor of St. John Vianney Church in Gallatin, with the mission of St. Frances Cabrini in Lebanon.  From 1970 until his retirement in 2008, Father Bernard was pastor of both St. Pius X Church and Church of the Assumption in Nashville.  The historic Assumption Church, built in 1859 was falling down and almost totally abandoned by 1970.  With great love for the Blessed Mother’s church, a few volunteers began the hard work of restoring the old buildings, and building up the parish.  It was a labor of love for the rest of Father Bernard’s life.  On June 19, 2012, Bishop Choby announced that Pope Benedict XVI had appointed Father Bernard to the rank of Prelate of Honor to his Holiness and granted him the title of Monsignor.

In lieu of flowers, a kind donation may be made to St. Pius X Classical Academy in Nashville, or Sacred Heart School in Lawrenceburg.