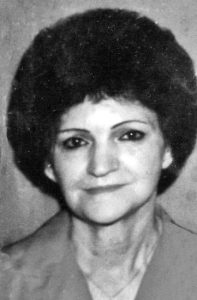 She was a native of AL, and retired CNA from The Summit of Lawrenceburg.

She was preceded in death by her parents, Bill and Minnie Beatrice Judkins Ingram; her husband, Horace W. Howell; and four siblings.

Funeral services for Betty Howell Banks were conducted at Neal Funeral Home at 3:00 p.m. Wednesday, November 21, 2018, with Rodney Krick officiating. Interment will follow at Bumpas Cemetery in Lawrenceburg, TN. Condolences may be sent by way of our website at www.nealfuneralhome.net.