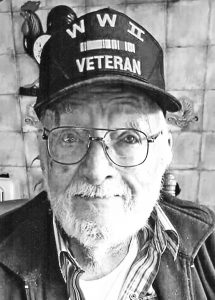 James Calvin (J.C.) Hicks of Fall River welcomed his loving wife, Doris, and Jesus as they came to take him Home in the early hours of Friday, November 30, 2018.

J.C. was born January 31, 1926 in Scottdale, GA. He served his country during WWII then moved his family to FL for health reasons.

He raised five children and retired from the Construction Industry as a self-employed Building Contractor.  He relocated to Leoma in the early 80’s and farmed and raised cattle.

He was preceded in death by his faithful wife of 60 years, Doris Manus Hicks, Granddaughter Lisa Helt, parents Lawson and Suvilla Hicks, and three brothers, Lee, Williams and Hubert.

The family will hold a private memorial for J.C. at a later date.