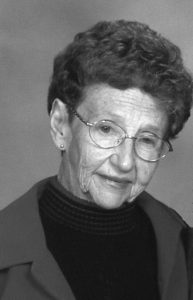 She was a native of Green Hill, AL, retired from Salant & Salant, a homemaker, and a member of Antioch United Methodist Church.

She was preceded in death by her parents: Raleigh and Lonie McLaughlin Green; and her husband: Edward Marston.

Funeral services for Annie Elizabeth Green Marston were conducted at Antioch United Methodist Church at 3:00 p.m. on Sunday, December 9, 2018 with Rose Taylor, Harry Green and Earl Davis officiating. Burial followed at Freemon Cemetery in Leoma, TN. Family suggests memorials be made to the charity of your choice. Condolences may be sent by way of: www.nealfuneralhome.net. Neal Funeral Home was in charge of all arrangements.