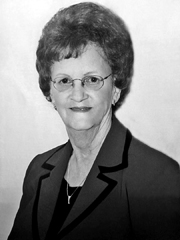 She was a native of Lawrence County, TN, a homemaker, and a member of Immanuel Baptist Church. She was also a member of the Order of the Eastern Star for 55 years including Pulaski Chapter 376 and Collinwood Chapter 422.

She was preceded in death by her parents, Sam and Loma Langley Williams; three brothers; and six sisters.

She is survived by her husband of 63 years: Harold Rucker, Lawrenceburg; two daughters:

Funeral services for Charlsie Ann Rucker were conducted at Immanuel Baptist Church at 1:00 p.m. Saturday, December 29, 2018, with Steve Clark and Reggie Coleman officiating. Interment followed at Leoma Cemetery in Leoma, TN. Condolences may be sent by way of our website at www.nealfuneralhome.net.