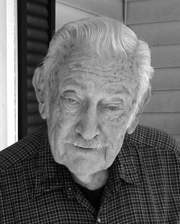 He was a native of Lawrence County, TN, retired from Western Electric, and of the Methodist Faith. He was a member of American Legion Post 146 and Mars Hill Community Club.  Mr. McCafferty served his country honorably in the U.S. Air Force during the Korean Conflict.

He was preceded in death by his parents: Otis and Lillian Daly McCafferty; three brothers; and one sister.

Funeral services for Orlando McCafferty were conducted at Neal Funeral Home at 2:00 p.m. on Thursday, December 27, 2018, with Billy Beal officiating.  Interment followed at Mimosa Cemetery with full military honors. Family suggests memorials be made to: St. Jude Children’s Research Hospital, 501 St. Jude Place, Memphis, TN 38105-9959. Neal Funeral Home was in charge of all arrangements. Condolences may be sent by way of: www.nealfuneralhome.net.