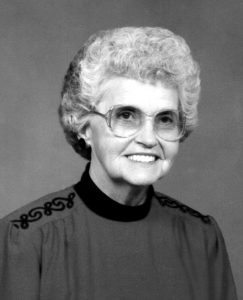 Gracie Dee Allred
Allred, Gracie Dee, age 87, of Tullahoma, passed this life on Monday, February 11, 2019 at NHC Healthcare.
She was a native of Lawrence County, a homemaker and a member of First Presbyterian Church in Tullahoma. Gracie was a devoted wife, mother, grandmother and friend. She was born June 1, 1931 along with a beloved twin brother, Grady Lee Lipscomb, now deceased. Her parents were the late Dolphus O. and Bertie White Lipscomb. In addition to her parents, Gracie was preceded in death by her husband: James Edward Allred; four sisters; and five brothers.
Gracie and James Allred were married in 1950. They spent 10 years of their early years of marriage in Toledo, Ohio where James was employed by Standard Oil Company. In 1962 they moved back to Lawrence County, Tennessee for him to take a job with Union Carbide where he was employed until his death in 1982.
Before moving to Tullahoma in 1986, Gracie was employed by Kay Windsor Corporation in Lawrenceburg for eight years. She was a part-time bookkeeper for Sanders Realty and Auction Company in Lawrenceburg for several years, as well.
She will be remembered by many people for the special love she had for young children she so often entertained in her home and on the farm throughout her life. She enjoyed preparing meals, making happy times for the children and sharing vegetables from her beautiful gardens with neighbors and friends. She also enjoyed country living and taking walks on the farm with family and friends.
Gracie is survived by her daughter: Sharon Allred Steely and her husband, Sidney Lee Steely, Jr. of Tullahoma; one grandson: James Lee Steely of Atlanta, Georgia; two sisters: Bonnie Sanders and her husband Bill of Lawrenceburg and Sue Brewer and her husband James of Grosse Pointe Woods, Michigan; and several nieces and nephews.
As she requested, a private funeral service for Gracie Dee Allred will be held at Kilgore Funeral Home with Dr. Stephen Yates officiating. Burial will follow at Rose Hill Memorial Gardens. In lieu of flowers, for those who wish, memorial donations may be made in Gracie’s memory to First Presbyterian Church, P.O. Box 847, Tullahoma, Tennessee 37388, the Coffee County Children’s Advocacy Center, 104 North Spring Street, Manchester, Tennessee 37355, or to the charity of your choice. Kilgore Funeral Home was in charge of arrangements.
************
Her family wishes to thank relatives, neighbors, friends and the First Presbyterian Church family for their love, support, prayers and many, many acts of kindness throughout Gracie’s illness. A special thank you to Dr. Stephen Yates and Dr. Michael Bradley for their prayers, words of comfort and encouragement, visits and phone calls.