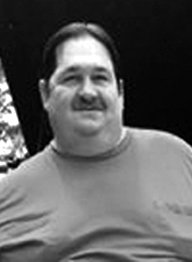 Johnny Wayne Scott
Johnny Wayne “Smoke” Scott, age 59, of Lawrenceburg, Tennessee, passed away unexpectedly on March 2, 2019.
Johnny was born February 16, 1960 in West Point, Tennessee to the late Burford and Lorene Scott. He was a native of Lawrence County and retired from Graphic Packaging. He was a member of the VFW and served as a chaplain of the Sons of the American Legion Post 063. He was a proud loving father, grandfather, brother, uncle, nephew and friend. He will be greatly missed by all who loved him.
In addition to his parents, he was preceded in death by his brother: Danny Joe Scott; and sister: Betty Brown.
He is survived by son: Johnny Lee (Alicia) Scott; granddaughters: Stormy and Haiven; Sheila (Johnny) Moser of Collinwood; brothers: Glenn (Linda) Scott of West Point, Jimmy (Joyce) Scott of Leoma; several nieces, nephews, and lifelong friends: Eddie Cobb and Wayne Myers..
A memorial service for Johnny Wayne “Smoke” Scott was held Saturday, March 9, 2019 at 1:00 p.m. at the VFW Hall, 517 East Gaines St., Lawrenceburg, Tennessee with Pastor Jerry McLain officiating. Williams Funeral Home was in charge of all arrangements. Online condolences may be made to: www.williamsfh.com.