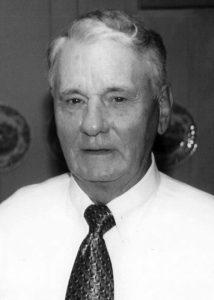 William K. Sandy
On Sunday, March 31, 2019, William K. Sandy, Sr., loving husband, father, and grandfather, left his earthly home. He spent his last days surrounded by family and friends.
He was a native of Lawrence County, TN he was born on Sunday, December 2, 1934, to the late Troy L. Sandy and the late Clara Eunice Sandy.
In addition to his parents, he was also preceded in death by his sister: Josephine Russell; brother: Floyd R. Sandy; and grandson: Richard (Bo) Hutson, Jr.
With only a sixth grade education he was a successful and admired business man. His career started in Memphis where he parked cars for Allright Parking. He married his wife Carroll, on September 18, 1953. He was transferred to Nashville where he and Carroll raised two children, Teresa and Bill. In Nashville, Kenneth ran his own parking business and became a real estate investor. He returned to Lawrence County in the 1990s when he retired from the parking business.
Kenneth was a member of Baugus Church of God, an avid fisherman, and enjoyed working his personal sawmill.  He was a member of the Lawrence County Classics Car Club. He frequented the store and campground near his home where many grew to love his quick wit, jolly laugh, and generous heart.
He leaves behind his wife of 65 years: Carroll Sandy; daughter: Teresa C. Garrett; son: William K. “Bill” Sandy, Jr. (Paula); granddaughters: Brandie Garrett Haberman (Matthew), Brittany King (Trey), Tiffany Granstaff (Justin), Cortany Kersey (CJ); eleven great-grandchildren; two great-great-grandchildren; numerous nephews, nieces, cousins, and friends.
Funeral services for William K. Sandy were conducted at Neal Funeral Home at 2:00 p.m. on Friday, April 5, 2019, with Kyle Conner officiating. Interment followed at Baugus Cemetery in Summertown, TN. In lieu of flowers the family suggests that you take the love of your life to (a fish) dinner; a lot of time needs to be invested if you want a marriage to last 65 years. Neal Funeral Home was in charge of all arrangements. Condolences may be sent by way of: www.nealfuneralhome.net.