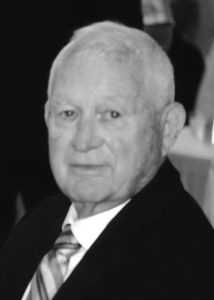 Charles Edward Boyd
Charles Edward Boyd, age 87, of Lewisburg, passed away at his home Thursday, April 25, 2019.
Charles was born April 2, 1932 in Lawrenceburg, TN. Upon graduating from high school, he served his country in the Army. He remained a patriot who loved his country. He loved to fish, especially at “Fish Camp” in Marianna, FL. Charles was blessed to work and retire from a job he loved, Tennessee Wildlife Resource Agency. The men he worked alongside and supervised held a special place in his life; many remained friends long after retirement. Another passion Charles enjoyed was being a Judge for The National Foxhunter’s Association. He served as a Field Judge, Home Plate Judge, and Master of the Hounds, and he is a member of the Fox Hunter’s Hall of Fame. Throughout the over forty years he served, he developed and enjoyed many lifetime friendships.
The greatest testament to a life well lived was his love for his family and their love for him. Charles married his high school sweetheart, loved being a father and cherished his role as a grandfather. He was retired when grandchildren arrived, so he was afforded the luxury of spending quality time with each grandchild. This time and love is a gift that will live on through each grandchild.
Charles was a member of First United Methodist Church in Lewisburg, TN. He always arrived early, listening to music rehearsals, sitting in the same pew year after year. He enjoyed helping with the church fish fries and serving where needed.
Charles was a self-proclaimed board member of the unofficial McDonald’s Coffee Drinking Club. Deep friendships were formed and many local and world issues were solved through these daily coffee drinking sessions; a true blessing and joy in his later years.
He was preceded in death by his parents: William Herbert “Hub” Boyd and Virgie Leigh Boyd; brothers: Bud Boyd and Gene Boyd.
He is survived by his devoted and loving wife of 63 years: Gloria Marston Boyd; daughters: Cindy Boyd Looney, and Joy Boyd Brown (Pete); five grandchildren: Clay Looney (Krista), Davis Looney, Carter Looney, Hardin Brown & Anna Boyd Brown; one great granddaughter: Eva Marie Looney; sisters: Louise Bates, Gail Hargis, Faye Sherman (Art), Sue Lightfoot (Jerry), Donna Crews (Jerry); many nieces and nephews.
Funeral Services for Charles Edward Boyd were conducted on Monday, April 29, 2019 at 2:00 p.m. at Lewisburg First United Methodist Church, with burial at Lone Oak Cemetery. London Funeral Home and Crematory was in charge of the arrangements.