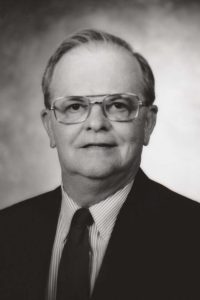 Robert Lilburn “Spanky” Green
Robert Lilburn “Spanky” Green, age 78 of Loretto, TN passed away after an extended illness on Sunday, May 12, 2019.
He was a member of Loretto Sacred Heart Catholic Church. After graduating from Loretto High School in 1958 he went on to earn a Bachelor’s of Business Administration from the University of Tennessee and a Master’s of Education from Middle Tennessee State University. He began his teaching career at Liberty Grove Elementary but spent the majority of his career at Loretto High School where he taught Economics and Government. During his 38 year teaching career he loved both his students and coworkers.
He was a long-term business owner starting and operating Spanky’s Washtub in Loretto, TN and The Laundry Mat in Lawrenceburg, TN. Later in life he was co-owner of Green’s Furniture Store in Loretto, TN. He served on the Lawrence County Commission as a commissioner for over 30 years where he loved interacting with the people of the community and helping to improve the lives of the people in the community in various ways whether it was working to obtain grants and funding for new drinking water lines to rural areas or helping to improving roads and schools.
He continued to serve his community as a long-term member of the Loretto Lions Club. As a Lions member he was instrumental in helping to establish the Loretto Lions Retirement Home and spent many hours volunteering in various ways from assisting with the children’s eye check program to working various fundraisers throughout the years.
He loved his family and was an avid sports fan. He especially loved watching his alma mater, the Tennessee Volunteers.
He was preceded in death by his parents: Christine Beckman Green and Thomas Lilburn Green; and grandson: Braxton Joseph Hollmann.
He is survived by his wife of 47 years: Annette B. Green; daughters: Susan Green Galbreath (Rob) of Springhill, TN and Kim Green Hollmann (Timothy) of Loretto, TN; grandchildren: Ally Hollmann, Aubrey Hollmann, Grayson Galbreath and Sam Galbreath; sister: Brenda Green McMasters; and several nieces and nephews.
The Funeral Mass for Robert Lilburn “Spanky” Green will be held at 10:00 a.m. on Wednesday, May 15, 2019 at Loretto Sacred Heart Catholic Church with Father Paul Nguyen officiating. Burial will follow at Loretto Memorial Gardens. Loretto Memorial Chapel is n charge of all arrangements. Memorials may be made to: Loretto Lions Club, PO Box 420, Loretto, TN 38469 or Sacred Heart Church at: 305 Church Street, Loretto, TN 38469.
The family would like to thank all of his caregivers over the years and extend a special thank you to longtime caregiver, Linda Luna.