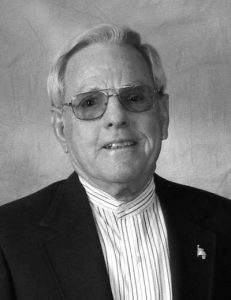 Gene Edwin Hayes
Gene Edwin Hayes, age 86, of Lawrenceburg, TN passed away Wednesday, May 29, 2019 at his residence.
He was a native of Lawrence County, TN, retired from Hayes Construction as a contractor for over 50 years, and a founding member of Immanuel Baptist Church where he served as a deacon. Mr. Hayes served his country in the U.S. Army, played in the U.S. Army Band, and was an avid fisherman.
He was preceded in death by his parents: James Forney and Lavada Messer Hayes; his wife: Sylvia Richmond Hayes; and three brothers: Noah Hayes, Wesley Hayes, and Everett Hayes.
He is survived by nephew: Bruce Everett Hayes; and niece: Laverne Hayes Oxford, both of Lawrenceburg, TN; several great-nieces and great-nephews.
Funeral services for Gene Edwin Hayes were conducted at Neal Funeral Home at 2:00 p.m. on Friday, May 31, 2019, with Reggie Coleman officiating. Burial followed at Lawrence County Memorial Gardens in Lawrenceburg, TN. Neal Funeral Home was in charge of all arrangements. Condolences may be sent by way of: www.nealfuneralhome.net.