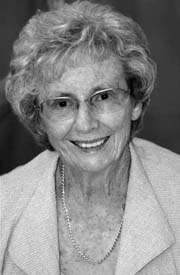 Virginia Raines Jeter
Virginia Raines Jeter of New Market and Lawrenceburg, TN passed away May 21, 2019 at Life Care Center in Jefferson City, TN surrounded by her children.
She was born May 6, 1927, in Memphis, TN to Cecil Lee and Amanda Moore Raines, who are deceased, along with the aunt who helped raise her, Mildred Robinson, and her brother, Cecil Lee Raines, Jr. She is survived by her beloved sister, Betty Shipmon, who still resides in Memphis.
Virginia was preceded in death by her husband of more than 60 years, William C. Jeter. Together, they raised a family of six children in Lawrenceburg, TN until moving to New Market in 2007. Their son Michael Jeter died in 2003. Virginia is survived by their other children: Kim Jeter (Sara) Santa Marta, Colombia; Gina Barham (Joe) Goodlettsville, TN; Amanda Parsons (Jim) Killen, AL; Emily Jeter, Alexandria, VA; and Lori Wicker (Ken) New Market, TN.
Also surviving are nieces and nephews who were dear to Virginia, and she especially enjoyed her grandchildren: Jonathan Jeter; Aubrey and Rylee Parsons; and Sam, Anna, Ben, Nathan and Eli Wicker. She was proud to have lived to be a great-grandmother to Aubrey’s daughter: Etta Fields; and Anna’s children: Titus and Maisy Ashburn.
In her last year especially, Virginia struggled from the effects of two falls, vision loss and mini-strokes. But she is remembered by many as a fun-loving mother, grandmother, aunt, and friend. In Lawrenceburg, Virginia was a homemaker, member of Snitch-A-Stitch Sewing Club and most recently, the Immanuel Baptist Church.
In New Market, Virginia attended the New Market Baptist Church when health permitted, and she thoroughly enjoyed farm living in beautiful East Tennessee, including, after her husband’s passing, the companionship of her special guardian and beloved cat, “Punk.”
A memorial service for Virginia Raines Jeter will be held in Lawrenceburg, at Immanuel Baptist Church, on Saturday, June 22, 2019. The family will receive friends beginning at 10:30 a.m. with the memorial service to begin at 12:00 p.m. A graveside service and inurnment will follow at Lawrence County Memorial Gardens. The family wishes to express its gratitude to the special caregivers of Smoky Mountain Hospice and Life Care Center of Jefferson City. Cremation services have been provided by Farrar Funeral Home of Jefferson City. The family suggests memorial donations be made to Immanuel Baptist Church or a charity of your choice.