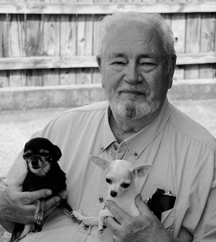 Ronald Eugene Edwards
On June 7, 2019, Ronald Eugene Edwards, beloved father, grandfather, and servant of the Lord, shed his earthly tent and crossed the river to be with his Maker and his precious wife. He passed away suddenly at his residence in Lawrenceburg, TN.
He was born in Columbia, TN on March 5, 1940. His early years were spent in the Culleoka community of Maury County. Later, his family returned to Columbia, where he graduated from Columbia Central High School in 1958. He attended David Lipscomb College and graduated from John A. Gupton College of Mortuary Science. Ronald was employed at several funeral homes in the Middle Tennessee area before he joined the Tennessee Highway Patrol in 1965. He also served in the Tennessee National Guard.
In 1961, he married the love of his life, Sarah Frances Pollock, and they had five children. He had a distinguished career with the Tennessee Highway Patrol, working in numerous progressive assignments, until he ultimately served as the Assistant Commissioner of the Tennessee Department of Safety. He retired with 25 years of service from the State of Tennessee and returned to the funeral business in Shelbyville, Tennessee. He worked an additional 10 years before retiring in 2003 and moving “home” to Lawrenceburg.  He was a member of the Marcella Falls Church of Christ in Ethridge, Tennessee.
Ron – or Pappy, as he was called by everyone, loved his God, his country, and his brethren, family and friends. He adored his four Chihuahuas who never left his side. He looked forward to a good football game, a home cooked meal, and loved ones dropping in to share these simple pleasures. He was a converted Democrat, a patriot, and a lover of coffee in the morning and a bowl of ice cream before bed, much to the chagrin of his cardiologist. He had an abundance of natural talent in numerous skill sets and crafts. He was gifted with a stunningly beautiful voice, and he was an expert instrumental musician, cook, author, woodworker, artist, teacher, and marksman. He used these talents to give generously to his fellow men in every conceivable way. “Pappy’s Pizza” was the stuff of legends, and his pizzas were a coveted gift! Someone said of him, “He’d give you the shirt off his back, and then give you ten just like it.” If he liked you, he loved you, and if he disliked you, he prayed for you.
He was preceded in death by his wife of nearly 54 years: Sarah Frances Pollock Edwards; his father: Carl Wilburn Edwards; his mother: Brownie Mae Sweeney Hollaway; his baby sister: Patricia Ann Edwards; and his son-in-law: Timothy Joseph Nolan.
He is survived by his daughter: Dana Edwards Nolan; his sons: Ronald Douglas “Doug” Edwards and Daniel Jay (Stephanie) Edwards, all of Lawrenceburg, Don Mark (Ariane) Edwards of Berlin, Germany, and Jonathan Andrew “Drew” (Brooke) Edwards of Phil Campbell, AL; fourteen grandchildren; one great-grandchild. He also leaves four Chihuahuas who were faithful companions worthy of mention: Koko, Babe, Dolly, and Sweeney.
Funeral services for Ronald Eugene Edwards were conducted at Neal Funeral Home at 1:00 p.m. on Wednesday, June 12, 2019, with Drew Edwards officiating. Burial followed at Mimosa Cemetery in Lawrenceburg, TN. Neal Funeral Home was in charge of all arrangements. Family suggests memorials be made to A Kid’s Place Child Advocacy Center or St. Jude Children’s Research Hospital. Condolences may be sent by way of: www.nealfuneralhome.net.