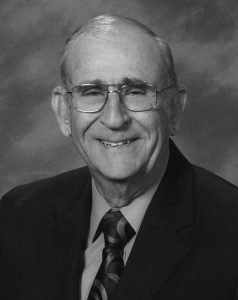 Gene Harris
Gene Harris, age 89, of Lawrenceburg, TN passed away Monday, July 8, 2019 at NHC Healthcare of Pulaski in Pulaski, TN.
He was a native of Portageville, MO, former employee of Murray Ohio, retired from the U.S. Air Force as a Senior Master Sgt. in Vietnam where he served his country honorably, and a member of Salem Church of Christ. He was a lifelong St. Louis Cardinals Baseball fan, was involved with little league as a baseball coach, and was “Batman” for the Lawrence County High School Softball team.
He was preceded in death by his parents: Ernest and Opal Rainwater Harris; and his wife: Mary Watson Harris.
He is survived by one son: Ernie Harris (Kay) of Lebanon, TN; one daughter: Debra Murphy (Michael) of Ethridge, TN; four grandchildren; eight great-grandchildren; and one brother: Jerry Harris (Mary Ann) of Leoma, TN.
Funeral services for Gene Harris were conducted at Neal Funeral Home at 11:00 a.m. on Wednesday, July 10, 2019, with Bill Brazier and Keith Barnett officiating. Interment followed at OK Cemetery in Lawrence County, TN with full military honors. Family suggests memorials be made to St. Jude Children’s Research Hospital. Neal Funeral Home was in charge of all arrangements. Condolences may be sent by way of: www.nealfuneralhome.net.