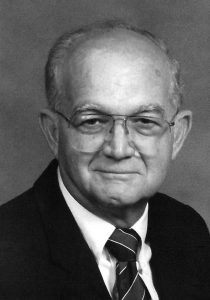 Wallace Harding Henson
Wallace Harding Henson, age 96 of Lawrenceburg, TN died July 3, 2019 at his home.
He was born on July 26, 1922 in Lawrence County, TN, the son of Jesse Robert Henson and Mary Rena Rose Henson. He was retired from the USDA with 37 years of service. A World War II Army Air Force Veteran, he served three years without getting to come home. He only returned home after the war was over. He was a member of Ethridge United Methodist Church and a member of Ethridge Masonic Lodge No. 777 for more than fifty years. He enjoyed his family, living on his farm, raising cattle, and being a member of the McDonalds’ Coffee Drinkers Club.
In addition to his parents he was preceded in death by his sister: Geneva Henson Hudson; a brother: Robert L. Henson; and nephew: John W. Hudson.
He is survived by his wife of 67 years: Faye Barnes Henson of Lawrenceburg, TN; one daughter: Rosemary Henson Staggs (Bruce) of Franklin, TN; one son: Thomas Barnes Henson (Barbara) of Charlotte, NC; one granddaughter: Margaret Jane Staggs Strelecki (Chris) of Franklin, TN; four grandsons: Andrew Harding Henson (Lindsey), Thomas Breckenridge Henson, Blair Barnes Henson (Kaley), and Jackson Lane Henson, all of Charlotte, NC; five great-grandsons; one great-granddaughter; and one brother-in-law: Bobby Hudson of Spring Hill, TN.
Graveside services and burial for Wallace Harding Henson were conducted at Lawrence County Memorial Gardens will full military honors at 10:00 a.m. on Tuesday, July 9, 2019, with Bobby Gobble officiating. His nephews and members of his family served as pallbearers. Family suggests memorials be made to Ethridge United Methodist Church. Neal Funeral Home was in charge of all arrangements. Condolences may be sent by way of: www.nealfuneralhome.net.