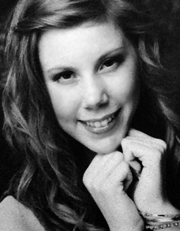 Bayley Marie Hutcherson
Bayley Marie Hutcherson age 23, a native of Columbia, TN passed away on July 16, 2019.
Bayley was born November 27, 1995, the daughter of Brandy and Nick Moore of Lawrenceburg and Marty Hutcherson of Columbia. In her short life she resided in Columbia, Lawrenceburg and, most recently, Old Hickory, TN.
As an infant and young child Bayley delighted her parents and grandparents with her special personality, disposition and antics along with her “pixie-like” nose. At a young age she began playing soccer, which grew into a passion. She became very accomplished and fiercely competitive. She also came to enjoy art and her unique flowing and swirly writing. Bayley continued with soccer up to her early high school years, but continued to enjoy, and further develop her artistic flairs her entire life. She also experimented with the art of karate, attaining a green belt level. She became involved with swimming, which she grew to love. She became very talented in the sport and won numerous awards. It was the internal focus and concentration of the exercises, however, that she found rewarding. She continued this path of Zen through her high school years. During that time, a sister and brother entered her life and Bayley became “the world’s best big sister.” (Go ahead, just ask them!)
Bayley recently trained at Aveda Institute, a highly regarded beauty school specializing in esthiology, where she could utilize all of her lifelong artistic abilities and her warm and caring nature for people in her career. Bayley had already set up her own studio for business and had a strong client list awaiting her services. Her excitement and happiness were so great that it acted as a contagion to her family and those around her. They thought Bayley had “hung the moon!”
On behalf of Bayley, her family expresses their condolences to the many friends and acquaintances she garnered in her life. Bayley was always warm and polite to all she came to know and truly cherished their friendships.
In addition to her parents, Bayley is survived by her precious daughter: Chamberlyn Young; younger sister and brother: Lanie Grace and Miles Douglas Moore; paternal grandparents: Joan Hardison (Norman) of Columbia TN, and Gary Hutcherson of Georgia; her maternal grandparents: Douglas Lee Wright, Jr., of Columbia and Wanda and Mike Roth of Columbia/Lawrenceburg; special friend: Tony Young of Old Hickory, TN; Tony’s sisters: Cherokee and Grace Owens of Old Hickory; many aunts, uncles, nieces, nephews and extended family members in Middle TN, Georgia, Florida and Michigan.
A private graveside and interment service were held for Bayley Marie Hutcherson with Bro. Chad Moore officiating. Bennett-May & Pierce Funeral Home and Crematory of Pulaski, TN was in charge of all arrangements. Inquiries are being handled by the funeral home at 931-363-0828.