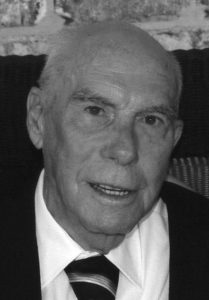 Gene Henderson
Gene Henderson, born Sunday, May 26, 1929 in his beloved town of Big Pine, North Carolina, passed away Monday, August 12, 2019 at NHC Scott Healthcare in Lawrenceburg, TN at the age 90 years, 78 days.
‘Uncle Gene’ was a member of Big Pine Baptist Church and a veteran of the U. S. Army where he drove a tank. After the military, he migrated to Michigan to find work. He worked at Ford Motor Company in Ypsilanti, MI where he had a perfect attendance record for 39 years. In his off time he moonlighted as a security guard. He met Pauline Robbins, who was originally from Lawrenceburg, TN, and eventually married her. He loved to hunt, ride his motorcycle, and work.
After retiring in the early 1990’s, Uncle Gene and Aunt Polly moved to Lawrenceburg. Anyone who visited was sure to be offered a cup of coffee and a story about his days working at Ford, hunting, or growing up in his hometown. Uncle Gene was a gentle giant of a man with a very kind heart.
He was preceded in death by his parents: Doyle and Tilda Worley Henderson; his wife: Pauline Robbins Henderson; brothers: Kelly, Albert, Cecil, Scott, Robert; and one sister: Mamie.
He is survived by one brother: Don Henderson (Rose) of North Carolina; step-son: Myron Lester Newton of Michigan; step-grandchild: Leigh Anne Newton; and step-great-grandchild: Catherine Marie Newton. Survivors also include his caretakers: Tommy Lee, Lesa, and Abigail Kidd; and many nieces and nephews that he loved very much.
Funeral services for Gene Henderson were conducted on Thursday, August 15, 2019 at 11:00 a.m. at Neal Funeral Home with Robin Kidd, Tommy Lee Kidd, and Abigail Kidd officiating.  Burial followed at Lawrence County Memorial Gardens in Lawrenceburg, TN with full military honors. Those who served as pallbearers were: Alan Shults, James Smith, Terry Robbins, Kenneth Smith, Jerry Driver, Woodrow Sutton, and Myron Robbins. Honorary pallbearers were the employees of The Summit of Lawrenceburg. Neal Funeral Home was in charge of all arrangements. Condolences may be sent by way of: www.nealfuneralhome.net.