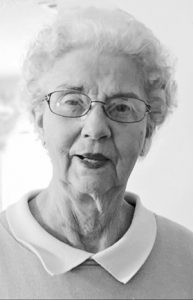 Margaret Jennings McKennon was born on February 17, 1929 and passed away peacefully in her sleep at age 90 late Monday night, October 21, 2019.

She began oil painting in 1986, attended Ann English’s Art classes for many years and has several noted paintings throughout Lewis County. She loved her family and enjoyed tutoring at Lewis County Elementary for over 30 years. She faithfully attended First Baptist Church and taught the Women’s Sunday school class for 60 years. She was beloved by many and will be missed, although we know we will be reunited with her in Heaven.

Funeral services for Margaret Jennings McKennon were held at 11:00 a.m. on Saturday, October 26, 2019. Neal Funeral Home was in charge of all arrangements.