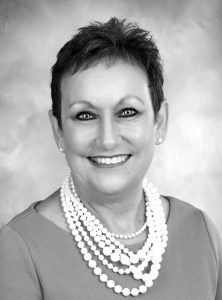 Teresa Peters Dunkin was born in Lawrenceburg, TN on June 30, 1958 and passed away after an extended illness on October 20, 2019 at the Sarah Cannon Cancer Center in Nashville, TN.

Teresa was the Lawrence County Register of Deeds for the past 23 years and served in that office for the past 31 years. She served on many boards and charitable organizations with her favorites always being those that dealt with the welfare of children. She was quick-witted with a wonderful sense of humor that brought joy to all those she encountered.

Teresa had a passion for butterflies. She spent many hours in the garden with Marty preparing the flowers for their arrival. Her grandchildren were the source of her truest joy, only to be followed by getting to see her beloved “Blue Angels” and her love for the beach. It was her happiest of places and she wanted to spend time there as often as possible.

Funeral services for Teresa Peters Dunkin were conducted at Lawrenceburg Cumberland Presbyterian Church at 1:00 p.m. on Wednesday, October 23, 2019 with David Morgan and T. R. Williams officiating. Interment followed at Lawrence County Memorial Gardens in Lawrenceburg, TN. Family suggests memorials be made to the Maury Regional Health Care Foundation Women’s Center Fund. Neal Funeral Home was in charge of all arrangements. Condolences may be sent by way of: www.nealfuneralhome.net.

“How does one become a butterfly?” Pooh asked pensively.

“You must want to fly so much that you are willing to give up being a caterpillar,” Piglet replied.

“You mean to die?” asked Pooh.

“Yes and no,” he answered. “What looks like you will die, but what’s really you will live on.”