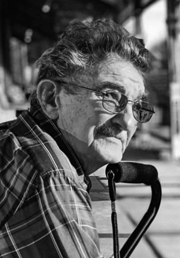 Max Eugene Belew
Max Eugene Belew, age 81, of Summertown returned into the Spirit of God from whence he came, on November 8, 2019 at home, surrounded by his family.
Max was born on December 31, 1937 to Paulie and Bessie (Ketchum) Belew in Lawrence County, TN. He was an accomplished carpenter, well known for his wood-working and finish carpentry skills. He helped with the rebuilding of the famed Rattle N Snap plantation home in Mt. Pleasant in the late 1970s and also worked as a butcher at various times in his life. He ended his working career as the manager of the meat department at Piggly Wiggly in Columbia, TN.
Max accepted Jesus as his Savior in 1980 in the Church of God but soon realized he needed to know more of God in a personal relationship – and he did. Max loved sharing about God. His message to all is, if you don’t know Jesus, you are missing out on the most wonderful experience in this lifetime.
Max’s pride was his family. He and Edna (Gobble) married when he was 19 and their marriage lasted 62 ½ years. Unto this marriage were born three children, seven grandchildren and six great-grandchildren, all of whom cherish their “Pa”.
In addition to his parents, Max was preceded in death by sisters: Paula (Scootie) Willoughby and Marie Brewer; and brother: Billy Belew – his partner in crime.
He is survived by his wife: Edna (Gobble) Belew of Summertown; son: Ricky (June) Belew of Summertown; daughters: Cindy (Dub) Smith of Lawrenceburg and Patty (Scott) Franks of Summertown; sisters: Shirley Berry, Peggy Belew, Sondra Phillips; brothers: Clarence, Raymond, Pete and Ike Belew; grandchildren: Walt (Amy) Smith, Katie (Jason) Busby, Cory (Taryn) Franks, Emily Franks, Neylan Franks, Dylan Belew and Dalton Belew; and six great-grandchildren.
Funeral services for Max Eugene Belew were conducted at Neal Funeral Home at 2:00 p.m. on Sunday, November 10, 2019 with Lanier Nail officiating. Interment followed at Ethridge Masonic Cemetery in Ethridge, TN. Family suggests memorials be made to St. Jude Children’s Research Hospital. Neal Funeral Home was in charge of all arrangements. Condolences may be sent by way of: www.nealfuneralhome.net.