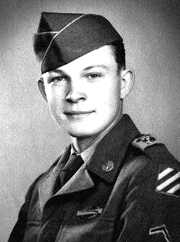 Bobby Joe Runions
Bobby Joe Runions was born April 7, 1931 in Miston, TN in Dyer County, and passed November 19, 2019 in Lawrenceburg, TN.
He was born during the depression and worked on the family farm until he enlisted in the US Army. He retired with 22 years of active duty and National Guard service. At age 19 he was sent to the front line in Korea as an engineer, but immediately became an infantryman. While in Korea, most of his time was spent in North Korea. He received two Purple Hearts and the Bronze Star for his actions in liberating a Prisoner of War Camp where American troops were being held. He had no roof over his head for the time he was in Korea, and it was often -50º. His unit was cut off while in North Korea. On Christmas Eve, the Chinese decorated a Christmas tree and played Christmas music in front of the surviving soldiers, telling them that they would die that night. The soldiers fixed bayonets, as they were out of ammunition, and assumed that they would perish. They received information that help was coming and were told to “keep their heads down or it would be blown off.” Bobby survived the largest United States bombardment in history while lying in his foxhole. In the morning when he looked out in front of him thousands of Chinese lay dead on the frozen ground. The Christmas tree was no longer there. Help came and they were able to retreat. He was again injured and sent back to the United States to heal. Afterwards, he assisted in drill instruction at Fort Knox, KY and was later Honorably Discharged.
Later on, he re-enlisted and served in the 269 MP Company in Dyersburg. At age 62 he was sent to Operation Desert Storm and was a witness to the “Road to Death” where the Iraqis Army was destroyed. After that, he retired from the US Army and his civilian job.
Bobby became a Christian. He was baptized and ordained as a deacon at Second Baptist Church in Dyersburg, TN, where he served as a Sunday School teacher. He and his wife Roberta later moved to Lawrenceburg to be near their grandchildren. They were members of the Deerfield Baptist Church. He was a ham radio operator, with his call being WB4IBC/SK. He enjoyed spending time with his family, hunting and fishing, and helping on the family farm on Piney Road.
He was preceded in death by his mother: Eva Bottoms Runions and Charlie (Buck) Runions of Miston, TN; brother: Herschel Runions of Tiptonville, TN; and sister: Betty Roberts of Dyersburg, TN.
He is survived by his wife: Roberta Runions of Lawrenceburg, TN; son: Randall Runions (Teresa) Lawrenceburg, TN, Howard Runions Newbern TN; brothers: Donnie Runions of Nashville, TN, Damon Runions of Memphis, TN; sister: Jane Harmon of Peagram, TN; grandchildren: Lydia Runions, Craig Runions, Amber Poston and Randy Runions of Lawrenceburg, TN and Bethany Baize of Charlotte, NC; great-grandchildren: Bryce McConnell, Ransen Runions and Sutton Runions of Lawrenceburg, TN.
Funeral services for Bobby Joe Runions were held at Pettus-Turnbo Funeral Chapel at 3:00 p.m. on Thursday, November 21, 2019 with Chris Gowan officiating. Interment followed at Deerfield Cemetery. Pettus-Turnbo Funeral Home was in charge of all arrangements. Condolences may be sent by way of www.pettusturnbo.com.