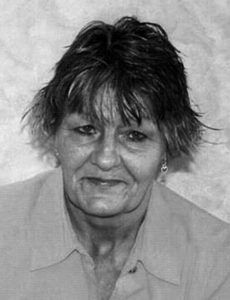 Esther Louise Davis Lance
Esther Louise Davis Lance (Sug), age 68, went to be with the Lord December 4, 2019.
She was a native of Toledo, OH, worked as a Certified Nurses Assistant, and was of the Baptist faith. She was a loving companion, mother, grandmother, great-grandmother, and friend. She had a kind heart and a giving spirit, was a lifelong Washington Redskins fan, and enjoyed playing bingo.
She was preceded in death by her parents: Warren Ellis Davis and Doris Elma Wainscott Davis; sister: Jacquelyn Ann Davis Bugg (Roscoe); brother: Harry Lee Wainscott.
She is survived by her life partner of 45 years: Stewart Eugene Lance of Lawrenceburg, TN; three daughters: Billie Jo Lance Clanton (Wess) and Jacquelyn J. Lance (Rick), both of Ethridge, TN, and Danyelle Sue Lance Rollins (Sam) of Toledo, OH; two sons: Charles Edward Lance and Stephen Eugene Lance, both of Lawrenceburg, TN; 18 grandchildren; 32 great-grandchildren; and several nieces and nephews.
A celebration of life for Esther Louise Davis Lance will be held on June 13, 2020 at The Pearson Metro Park at the Pearson Packer-Hammersmith Center in Toldeo, OH from 10:00 a.m. to 4:00 p.m. All family and friends are invited. Heritage Funeral Home is in charge of arrangements. Condolences may be sent by way of: www.TnFunerals.com.