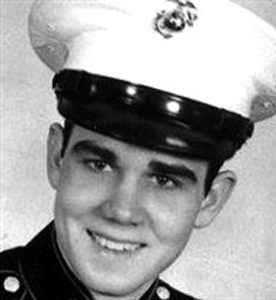 James Harold “Jim” Zimmerman
James Harold “Jim” Zimmerman, age 82, of Lawrenceburg, TN was received into the arms of the Lord on Monday, December 16, 2019.
Jim was a native of Reading, PA and a member of Coleman Memorial United Methodist Church where he enjoyed singing in the choir and the fellowship of his church family. He served his country in the United States Marine Corps and often recalled spending his 18th birthday on the bus to Parris Island Training Camp in South Carolina. The motto “Once a Marine always a Marine” held true for him. Jim received many awards during his service, but most of all he was glad to serve.
After retiring from the USMC, he was self-employed, working as a certified electrician and plumber. He maintained his passion to help his fellow man and enlisted to serve on many mission trips to various countries and disaster sites as a part of the Volunteers in Mission ministry of the United Methodist Church. Jim was grateful for the opportunity to use his talents, for many months serving those affected by Hurricane Katrina. While in Mississippi, he worked to help restore churches and homes damaged during the storm. He again served his fellow man by joining with others to build homes through the Habitat for Humanity Chapter in Lawrence County.
He was preceded in death by his father: Harold Lawrence Zimmerman; mother: Mary Elizabeth Grubb Zimmerman; and infant brother: David Lawrence Zimmerman.
He is survived by his wife: Lillie Zimmerman; children: Nathan Byelick, Dan Byelick, Donna Goldsmith, Robbie Colvert, Lori Smith, Ronnie Bivens, Daniel Zimmerman, Rhonda Steen, and Billy Zimmerman; twelve grandchildren; and six great-grandchildren.
A Celebration of Life for James Harold “Jim” Zimmerman will be held on Monday, December 30, 2019 at Coleman Memorial United Methodist Church in Lawrenceburg with Rev. Kevin Marston officiating. Visitation with the family will be from 11:00 a.m. until 1:00 p.m. at the church, with service following. In lieu of flowers, the family suggests memorials be made to the United Methodist Committee on Relief or Habitat for Humanity. Williams Funeral Home is in charge of all arrangements.