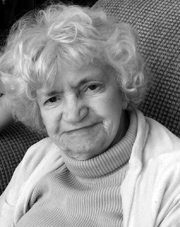 Christel Ingrid Haymons
Christel Ingrid Haymons, age 84, of Lenoir City, TN and former resident of Henryville, TN passed away on January 6, 2020 in Knoxville, TN.
Christel was born in Berlin, Germany to Hildegard and Erich Neumann in 1935. She met and married Charles R. Haymons and became a naturalized citizen, eventually settling in Henryville when her husband retired from the U.S. Army. In 2006, Christel and Charles moved to Lenoir City and became members of the First Baptist Church in Lenoir City. Christel loved her children and grandchildren dearly and enjoyed being with family. She loved dogs and cats and supported the Humane Society. Another favorite pastime of hers was shopping and dining out. When she moved to assisted living, she enjoyed bingo and socializing with other residents.
In addition to her husband and parents, Christel was preceded in death by a sister: Annalie Siebert.
She is survived by daughters: Baerbel Foster (Randy) and Nicole Cox (Don); granddaughters: Tiffany Hoppe and Melinda Curtis; grandson: Jason Foster; great-grandchildren: Elisa Hoppe, Nathan and Savannah Curtis, and Mikayla and Nicholas Foster; sisters-in-law: Ruby Haymons and Opal Campbell; as well as many nieces and nephews.
Many thanks to the staff at Royal Oaks in Lenoir City and Pinnacle Assisted Living in Knoxville for the love and care you gave “Miss Christel”.
Funeral services for Christel Ingrid Haymons were conducted at Neal Funeral Home at 11:00 a.m. on Thursday, January 9, 2020 with Sam Bullington officiating. Interment followed at Center Point Methodist Cemetery in Lawrence County, TN. Neal Funeral Home was in charge of all arrangements. Condolences may be sent by way of: www.nealfuneralhome.net.