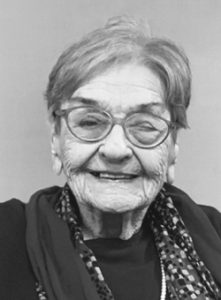 Marie Gregory Alsup
October 27, 1919 – February 5, 2020
Marie Gregory Alsup passed away Wednesday, February 5, 2020 at NHC Scott.
She was born in Fulton, MS on October 27, 1919, the youngest of six children. She was raised in AL and lived at home with her parents in Sheffield until she married. She met her husband in Florence working at a department store when he came in as a customer.
She lived in Lawrence County for 77 years. Her first two children were born while living in Loretto where her husband, Horace B. Alsup, taught at Loretto High School. Her third child was born while living on Waterloo Street in Lawrenceburg. She and her husband lived their later years on Ellingson Street. She lived at the Summit for four years.
She was the traditional housewife and mother. She excelled at sewing, especially for the two girls, making their church and school clothes, and making costumes and formals for school and community events. She was also exceptionally good at cooking.
As the children got older, she was proud of being active in the Pink Ladies several years and the Home Demonstration Club. She also worked part time at Gallahar’s and Lays on the square.
For 70 years, she was a member of the Downtown Church of Christ (College Place). She had much attention and support from members especially after her husband died.
She was preceded in death by her husband: Horace B. Alsup; daughter: Patricia Jane Alsup; granddaughter: Amanda Blanchard; and parents: William Thomas Gregory and Adelene Reed Gregory.
She is survived by daughter: Peggy Barger, Lawrenceburg; son: H.B. Alsup (Susie), Castalian Springs, TN; granddaughter: Sonia Scalf, Vestavia, AL; grandson: Andrew Alsup (Vicky), Hydes, MD; grandson: Brian Barger (Erin), Athens, GA; and seven great-grandchildren.
A private funeral for Marie Gregory Alsup was held at 11:00 a.m. on Friday, February 7, 2020 at Neal Funeral Home with Colin Leighton officiating. Interment was at Mimosa Cemetery. For those who desire, contributions may be made to their charity of choice.