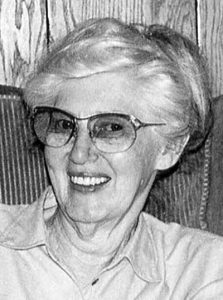 Mirl Ayers Smith
Mirl Ayers Smith, age 90, of Lawrenceburg, TN passed away Tuesday, February 11, 2020 at Gulf Coast Regional Medical Center in Panama City, FL.
She was a native of Florence, AL, retired from the State of Tennessee Department of Human Services, and a member of Highland Park Baptist Church.
Mirl was a beloved mother, grandmother, great grandmother, aunt, and friend. She was a graduate of Summertown High School and Martin Methodist College. She devoted her life to service in her county as she worked as a teacher, and for the Department of Human Services. She was a true follower of Christ. After retirement she was able to enjoy many trips with friends.
She was preceded in death by her parents: Marshall P. and Mary Dodd Ayers; her husband: Clifford W. Smith; and one son: Randy Smith.
She is survived by two sons: Barry K. Smith of Panama City, FL and Anthony Smith (Joy) of Callaway, FL; one granddaughter: Jennifer Jacobs of Lawrenceburg, TN; two great-grandchildren: Clifford Dalton Dickson and Callie Dickson both of Lawrenceburg, TN; several nieces and nephews.
Funeral services for Mirl Ayers Smith were conducted at Neal Funeral Home at 1:00 p.m. on Saturday, February 15, 2020 with Ricky Cotton officiating. Interment followed at Lawrence County Memorial Gardens in Lawrenceburg, TN.  Those serving as pallbearers included: Dalton Dickson, Luke Bassham, Keith Smith, Kevin Smith, Randy Pope, and Seth Lasater. Family suggests memorials be made to Highland Park Baptist Church or The Shelter, Inc. Neal Funeral Home was in charge of all arrangements. Condolences may be sent by way of: www.nealfuneralhome.net.