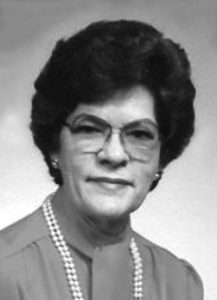 Ora Christine Parrish
Ora Christine Parrish, age 84, of Lawrenceburg, TN passed away Sunday, February 9, 2020 at AHC Millennium Nursing and Rehab Center in Huntsville, AL.
She was a native of Peppertown, TN and a member of First Baptist Church of Lawrenceburg where she was the secretary for many years.
She was preceded in death by her parents: Rufus and Ida Grace Sledge Griffin; her husband: Carl Parrish; and three brothers: Raymond Griffin, Norman Griffin, and Harlon Griffin.
She is survived by one son: Carl “Carsie” Parrish (Alisa) of Huntsville, AL; one daughter: Kathryn “Katie” Cushman (Lee) of Santa Barbara, CA; four grandchildren: Christi, Sarah, Melanie, and Caroline; three great-grandchildren: Raylan, Wyatt, and Nash; and one sister: Kathryn Brown of Birmingham, AL.
Funeral services for Ora Christine Parrish were conducted at Neal Funeral Home at 11:00 a.m. on Thursday, February 13, 2020, with Jeff Vanlandingham officiating. Interment followed at Mimosa Cemetery in Lawrenceburg, TN. Neal Funeral Home was in charge of all arrangements. Family suggests memorials be made to the Alzheimer’s Association. Condolences may be sent by way of: www.nealfuneralhome.net.