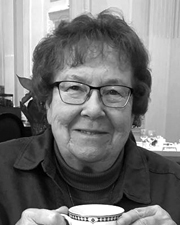 Juanita Marie Rose Rohling McArthur
On February 21, 2020, after a very brief battle with cancer, we said goodbye to our mother, our grandmother, our friend and our support system, Juanita Marie Rose Rohling McArthur
She was born on February 13, 1944 to John and Margaret (Meyer) Rohling. She spent her childhood in Lawrenceburg, TN with her brothers Tommy and Larry, sister Delores, and numerous aunts, uncles and cousins. (And we mean numerous!) She attended Sacred Heart Catholic School through eighth grade. Upon graduating from Lawrence County High School, Juanita ventured to Washington D.C. where she worked first in the fingerprint department of the FBI and then on Capitol Hill as a secretary to Senator Robert Byrd.
In Washington D.C. she met William McArthur and they married in July 1965. That adventure took her first to Camp Pendleton in California and then in 1967 to Klamath Falls, Oregon
It was in Klamath Falls that Juanita became a mother to her two daughters Theresa and Kathy. She joined Garden Club and met many lifelong friends who enjoyed crafting together. They made pencil holders out of juice cans, macramé plant holders (it was the Seventies!), created Christmas ornaments out of tin cans and rope, and decoupaged any and everything.
The family moved to Eugene, Oregon in 1976 and Juanita immersed herself in being a mom. She chaperoned on every school field trip, volunteered in classrooms, was a Camp Fire leader for 12 years, taught CCD, and cooked for the Encounter and Metanoia for Marist High School. She volunteered for the board on the swim team and hand typed many, many heat sheets. She joined Welcome Wagon and then Encore Club which eventually became Friendship Club where she enjoyed Lunch Bunch and bridge. But her most memorable activity in Eugene was neighborhood Bunco. She played monthly with the same group of friends for 25 years.
Somewhere in her busy schedule she found time to work at US Bank: first as a fill-in secretary, then a part-time administrative assistant with the Trust Department, and eventually moved to the support team for the Southwest Region. It was in Eugene that Juanita became an avid U of O Duck football fan. After supporting her Ducks through many losing seasons and enjoying tailgates every game day, she traveled to root them on in several Rose Bowls, the Cotton Bowl, and the Orange Bowl.
In 2001, she retired to be a full-time grandma. And what a G’ma she was. She moved to Newcastle, Washington to be close to her oldest grandkids, Juliana and Alex, but made numerous trips every year to Montana where her younger grandkids Megan, Michael, and Mallory lived. She babysat, she cooked, she cheered on her grandkids swimming, running track and cross country, and playing soccer, basketball, baseball and volleyball. She helped with Girl Scouts, Faith Formation, and in school classrooms. She attended piano recitals, band concerts, Christmas programs, and plays. She sent care packages to colleges and never missed celebrating a holiday or birthday. Even if she couldn’t be there in person, she made every family member feel special.
In 2015, with four grandkids in Montana, she moved permanently to Bozeman where she joined the Senior Center and enjoyed traveling and losing money playing pinochle.
Juanita will be missed by many but especially her daughters and their spouses Theresa and Scott Beauchene of Renton, Washington and Kathryn and Kevin Handelin of Bozeman, Montana and her grandchildren Juliana and Alex Beauchene and Megan, Michael, and Mallory Handelin.
A rosary and vigil will be held at Dahl Funeral & Cremation Service Tribute Center on Tuesday, March 17, 2020 at 7:00 p.m. A celebration mass of Juanita’s life will be held on Wednesday, March 18, 2020 at 11:00 a.m. at Resurrection University Catholic Parish. Juanita will be laid to rest with her family in Tennessee. Condolences and memories may be shared with the family at: www.dahlcares.com.