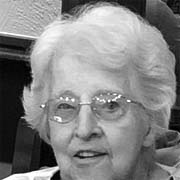 Mamye K. Eckhardt
Mamye K. Eckhardt, age 89, of Tulsa, OK passed from this life Sunday, March 1, 2020 in Tulsa.
She was born in Lawrence County, TN on October 21, 1930 to parents: Willie LittleJohn Keeter and Corine Phillips Keeter. She was raised in Lawrenceburg, TN with four brothers and four sisters. She also had two brothers who died at childbirth.
Mayme married Douglas Eckhardt on May 14, 1955 in Nashville, TN. Because of Doug’s military and post-military career they lived in many locales, including Alabama, Mississippi, Texas, New Mexico, Arizona, Maine, Tennessee, Florida and Las Vegas, NV. They moved to Oklahoma in 2005 just before Doug passed away and Mamye has called it home since. In March of 1955 they had their only child, a daughter named Susan Fair Eckhardt.
Mamye was a big sports enthusiast and especially loved the Atlanta Braves at one time even having a VCR recording of almost every game they played in a World Series winning year. She could talk sports with anyone! But she could argue politics with everyone. She loved to keep up with the political happenings in our country and definitely had her opinion about them. But her biggest joy in life was her family. Her last 15 years being so close to her daughter, son in law, grandchildren, and even great-grandchildren gave her such a wonderful ending to her amazing life. Even in the last few months she lost her zeal about sports and politics but never tired of seeing and talking to those that loved her so much.
In addition to her parents, Mamye was preceded in death by her husband: Douglas Eckhardt; brothers: Franklin Keeter and Billy Keeter; brothers-in-law: Lloyd Campbell, Landon Perry, and Chris Crisafulli.
She is survived by sisters: Maggie Campbell, Louise Perry, Helen Crisafulli, and Pinkie Lyons (Rex); brothers: Murray Keeter (Janie) and Charles Keeter (Carol); daughter: Susan Cliff (Danny); grandsons: Jonathan Cliff (Starr), Michael Cliff (Stephanie), and Stephen Cliff; granddaughter: Joy Roberts; great-grandchildren: Ryan, Dylan, and Lauryn Cliff, Connor and Elizabeth Roberts, and Alex and Ethan Cliff.
A celebration of life service for Mamye K. Eckhardt was held at 10:00 a.m. on Saturday, March 7, 2020 at Mobley-Groesbeck Funeral Service Chapel with grandson, Rev. Jonathan Cliff officiating. She was laid to rest at Woodland Memorial Park Cemetery in Sand Springs. Mobley-Groesbeck Funeral Service of Sand Springs was in charge of all arrangements.