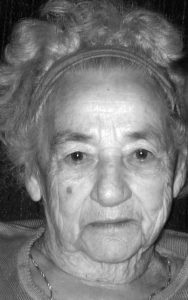 Louise White
Louise White, age 87, of Lawrenceburg, TN passed away Saturday, April 11, 2020 at Vanderbilt University Medical Center in Nashville, TN.
She was a native of Lawrence County, TN, a homemaker, owner of White’s Farms, and a member of Greenwood Church of Christ.
She was preceded in death by her mother: Lillie Ethel Henson; her husband: Joe Dennis White, Jr.; one son: Tim White; and one grandson: Caleb White.
She is survived by her daughter: Dorothy White Fleming (Randy) of Lawrenceburg, TN; one son: Randy White (Jennifer) of Lawrenceburg, TN; and four grandchildren: Tess Sandrell, Jonathan White, Lindsay White, and Ava White.
Due to the COVID-19 pandemic and in accordance with Governor Bill Lee’s Executive Order No. 17, a private graveside service for Louise White was held at Greenwood Cemetery in Giles County, TN. Neal Funeral Home was in charge of all arrangements. Condolences may be sent by way of: www.nealfuneralhome.net.