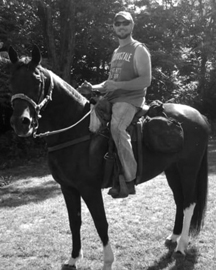 James Erik Ashmore
McMinnville, TN resident and Huntsville, AL native James Erik Ashmore, age 42, was born May 1, 1977 and died April 20, 2020 at his residence following a sudden illness.
A contractor for B&B Insulation and a member of the Pentecostal Church of McMinnville, he was the son of the late Louie and Debra Derryberry Ashmore.
He is survived by wife: Megan Ashmore of McMinnville, TN; four daughters: McKenzie (Brandon) Jones of Alabama, Brooklyn Ashmore and Alexis Ashmore both of Lynnville, TN and Chloe Ashmore of Spring Hill, TN; grandson: Brantlee Jones; sister: Olivia (David) Williams of Lawrenceburg, TN; niece: Peyton Fralix of Lawrenceburg, TN; nephew: Caleb Williams of Lawrenceburg, TN; and numerous other loved ones and friends also survive.
A celebration of life for James Erik Ashmore will be held at a later date. High Funeral Home, McMinnville, is in charge of all arrangements. Online condolences may be made by way of: www.highfuneralhome.com.