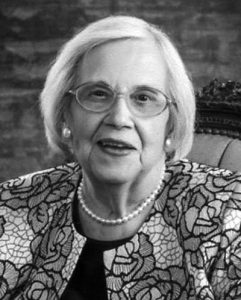 Maggie Keeter Campbell
Maggie Keeter Campbell, age 90, of Lawrenceburg, TN passed away Monday, May 11, 2020 at her home.
She was a native of Lawrence County, TN, former owner of Campbell’s Food Town, a member of Coleman Memorial United Methodist Church, Lawrenceburg Eastern Star Chapter #103 and charter member of the Lawrenceburg RoAnn Club. She was a long-time, faithful member of Coleman Memorial United Methodist Church where she was a long-time member of the George Finley Sunday School Class. She lovingly referred to her church as her family, as well.
She graduated high school in the LCHS Class of 1947, attended Draughon’s Business College and returned to Lawrenceburg to spend many years working at Parks Motor Company, followed by Brewer Marston Ford and in later years when she and her husband bought H.G Hills Grocery which became Campbell’s Food Town, she devoted her career to owning and running the family business. Their marriage was a true partnership in every way.  Their near 40 years together was spent as active community members, engaging in numerous musical initiatives where Loyd and Danny played many instruments and Maggie was their greatest fan.
She was preceded in death by her parents: William L. Keeter and Sarah Corine Phillips Keeter; husband: Loyd Cole Campbell; son: Danny Cole Campbell; sister: Mamye Eckhardt; and brothers: Franklin and Billy Keeter.
She is survived by two brothers: Murray (Janie) Keeter of Clarksville, TN and Charles (Carol) Keeter of Florence, AL: three sisters: Helen Crisafulli of North Smithfield, RI, Louise Perry of Summertown, Pinkie (Rex) Lyons of Lawrenceburg; close cousin: Betty Ann Price of Lawrenceburg, TN; and a host of nieces and nephews whom she has loved and cared for over much of her almost 91 years.
A private graveside service for Maggie Keeter Campbell will be scheduled for the family.  Family suggests memorials be made to Coleman Memorial United Methodist Church. Neal Funeral Home is in charge of all arrangements.