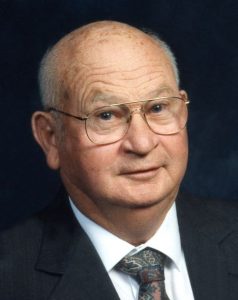 Charles Ollie Shands
Charles Ollie Shands, born April 24, 1935 in Collinwood, TN to Marie Nowlin Shands and Ollie Shands, passed away quietly Monday, May 18, 2020 at Countryside Healthcare and Rehabilitation in Lawrenceburg, TN at the age of 85.
He lived in the County Line community and was a 1954 graduate of Lawrence County High School. He spent a few years wiring houses before entering the Army. He served his country honorably from 1958 to 1960. He attended Industrial Technical School while working in steel fabrication, then married the love of his life and raised two children and a grandson. He was a charter member of West End Community Club. He was always willing to lend a hand to neighbors and friends, loved gardening, camping, and raising livestock. He worked at TVA and retired in 1996. He was also a member of  Boilermaker’s Local 455.
He was preceded in death by his parents: Ollie and Marie Nowlin Shands; two brothers: Earl Shands (Delphine) and Johnny Shands; and one sister: Mary Ann Renshaw (Earl).
He is survived by his wife: Joyce Shands of Lawrenceburg, TN; one son: John Shands of Lawrenceburg, TN; one daughter: Sarah Shands Allen (Shannon) of Bellevue, NE; three grandchildren: William Barrett Shands of Moses Lake, WA, Courtney Allen and Christian Allen both of Bellevue, NE; and one sister-in-law: Peggy Shands of Lawrenceburg, TN.
Funeral services for Charles Ollie Shands were conducted at Neal Funeral Home at 2:00 p.m. on Thursday, May 21, 2020 with Harold Young officiating. Interment followed at Highland Cemetery in Wayne County, TN with full military honors. Neal Funeral Home was in charge of all arrangements. Condolences may be sent by way of: www.nealfuneralhome.net.