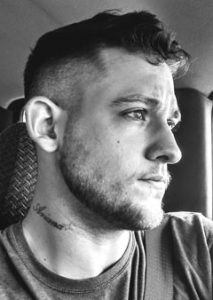 Benjamin Allen “Ben” Cunningham
Benjamin Allen “Ben” Cunningham departed his earthly tether on May 28, 2020 at the age of 28.
Born December 26, 1991, Benjamin was the second born child and eldest son of Timothy Allen and Cathy Pope Cunningham. He was a brother to Sarah Cunningham Robinson (Adam), Grace Cunningham King (Austin), Nathanael Luke Cunningham, and Micah Daniel Cunningham. He was an uncle to Naomi Dawn, Rowen Astoria, and Norah Evangeline King, and a grandson to Junior “PawPaw” Pruitt. He was also a nephew, cousin, and friend to many.
Benjamin spent his youth as a member of New Hope Primitive Baptist Church where his father serves as pastor. His time in the church brought him much happiness and he regarded his fellow members as extended family.
After completing his formative education at Ethridge Elementary School, Benjamin went on to be a 2010 graduate of Lawrence County High School. Since then, he has been employed in various settings including food service, construction, and factory work.
Benjamin enjoyed a number of hobbies throughout his life, which include drawing and creating art, reading and writing, playing video games, being a self-taught guitar player, cooking, and working with his hands. He was truly a man of many skills and passions.
In 2012 Benjamin became the proud father of a beautiful daughter, Ariana Ember Cunningham (mother Alicia Ceasar). Ariana’s birth was quickly followed by the birth of his son, London Cobain Cunningham (mother Alicia Ceasar) in 2013 and in 2019 his second Daughter, Sylvia Rose Cunningham was born (mother Samantha Hathaway). His children were his entire world and he was a devoted and loving father. He deeply treasured the bond he shared with the mothers of his children.
He was preceded in death by his paternal grandparents: Hazel Allen and Lucille Stanley Cunningham; as well as his maternal grandparents: Joe Cordell Pope and Wilma Walker Pruitt. Several aunts and uncles also preceded his passing.
Funeral services for Benjamin Allen “Ben” Cunningham were conducted at Neal Funeral Home at 1:00 p.m. on Tuesday, June 2, 2020, with Tim Cunningham officiating. Interment followed at Lawrence County Memorial Gardens in Lawrenceburg, TN. Neal Funeral Home was in charge of arrangements. Family suggests memorials be made to: Brain & Behavior Research Foundation, 747 Third Avenue, 33rd Floor, New York, NY, 10017. Condolences may be sent by way of: www.nealfuneralhome.net.