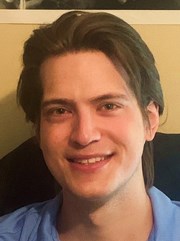 Douglas Harwell McClew
Douglas Harwell McClew, age 25, of Memphis, TN passed away Sunday, August 16, 2020.
He was a native of Memphis, TN, was a jazz drummer and played with the band, Chopped-Up Tulips, while living in New Orleans.  He graduated from Memphis University School where he was a Junior Olympic Fencer, attended Loyola University in New Orleans. Douglas graduated Cum Laude from University of Memphis with Bachelor of Science Degree in Accounting. He was a member of Grace-St. Luke’s Episcopal Church in Memphis, TN. Douglas was a founding member of the Kappa Sigma Fraternity at the University of Memphis. His passions were music, including a love for The Beatles, drums, martial arts, and he was fluent in Spanish. Douglas was a member of the Charlotte North Carolina Harley Owners Group, and he enjoyed riding motorcycles with his grandfather, Daddy Doug.
He is survived by his mother: Perry Harwell McClew of Memphis, TN; one sister: Hope Harwell McClew of Memphis, TN; one brother: Rory Sullivan of Memphis, TN; grandparents: Doug and Cathey Harwell McClew of Monroe, NC; aunts: Catie Harwell, Cherie Plant (Paul), and Christy Bottoms (Mike), all of Lawrenceburg, TN; and many beloved cousins.
A private graveside service was held for Douglas Harwell McClew at Mimosa Cemetery in Lawrenceburg, TN. Neal Funeral Home was in charge of all arrangements. Family suggests memorials be made to the GoFundMe – Doug McClew Memorial Fundraiser https://www.gofundme.com/f/doug-mcclew-memorial-fundraiser,  Memphis University School – Music or Theater Department, or the Grace-St. Luke’s Episcopal Church or School.  Condolences may be sent by way of: www.nealfuneralhome.net.