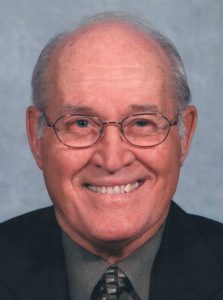 Billy Joe Foust
Billy Joe Foust of Columbia, TN passed away due to complications of COVID 19 on Wednesday, August 26, 2020 at Maury Regional Medical Center. He was a resident of The Bridge of Columbia.
Joe was born in Cullman, AL on August 7, 1930 to Percy and Grace Foust. He married his sweetheart, Lila Belle Harris, on October 16, 1948 and they were happily married until her death in1997.
Joe was quite industrious and held jobs as a farmer, milkman, owned a tire store and worked in later years as an insurance salesman. He was an active member of Pleasant Heights Baptist Church for fifty years as well as a member of the Masonic Lodge of Tennessee and the Lions Club of Columbia, TN. He enjoyed fellowship with other members of his church and clubs and could be counted on to put out curbside flags during national holidays raising money for those in need of eye glasses.
He also enjoyed line dancing with his long-time companion Mable Goodwin, listening to country music, and earned the nickname of “Road Runner” for his love of driving around Columbia in his truck. He also enjoyed bingo at The Bridge and eating peanuts and ice cream (to the chagrin of his daughters since he was a diabetic) while watching the Atlanta Braves or Alabama Crimson Tide.
He is survived by his loving daughters: Joan (Joe) Yeager of Smyrna, TN, Rhonda (Mike) Doerflinger of Lawrenceburg, TN and Christi (Kevin) Geiger of Atlanta, GA; six grandchildren: Jeff (Kelly) Doerflinger, Jenny (Brad) Golden, Anna (Jason) Smith, Harris, Parker and Lila Geiger; six great grandchildren: Jacob and Ella Golden, Ruby Lynn and Rylan Stotts, and Will and Bennett Doerflinger; and one brother: Max (Bette) Foust of Walnut Creek, CA.
A private graveside service for Billy Joe Foust was held at Polk Memorial Gardens with Rev. Bob Vassar officiating. Oakes & Nichols Funeral Directors assisted the family with arrangements. Condolences may be sent by way of: www.oakesandnichols.com.